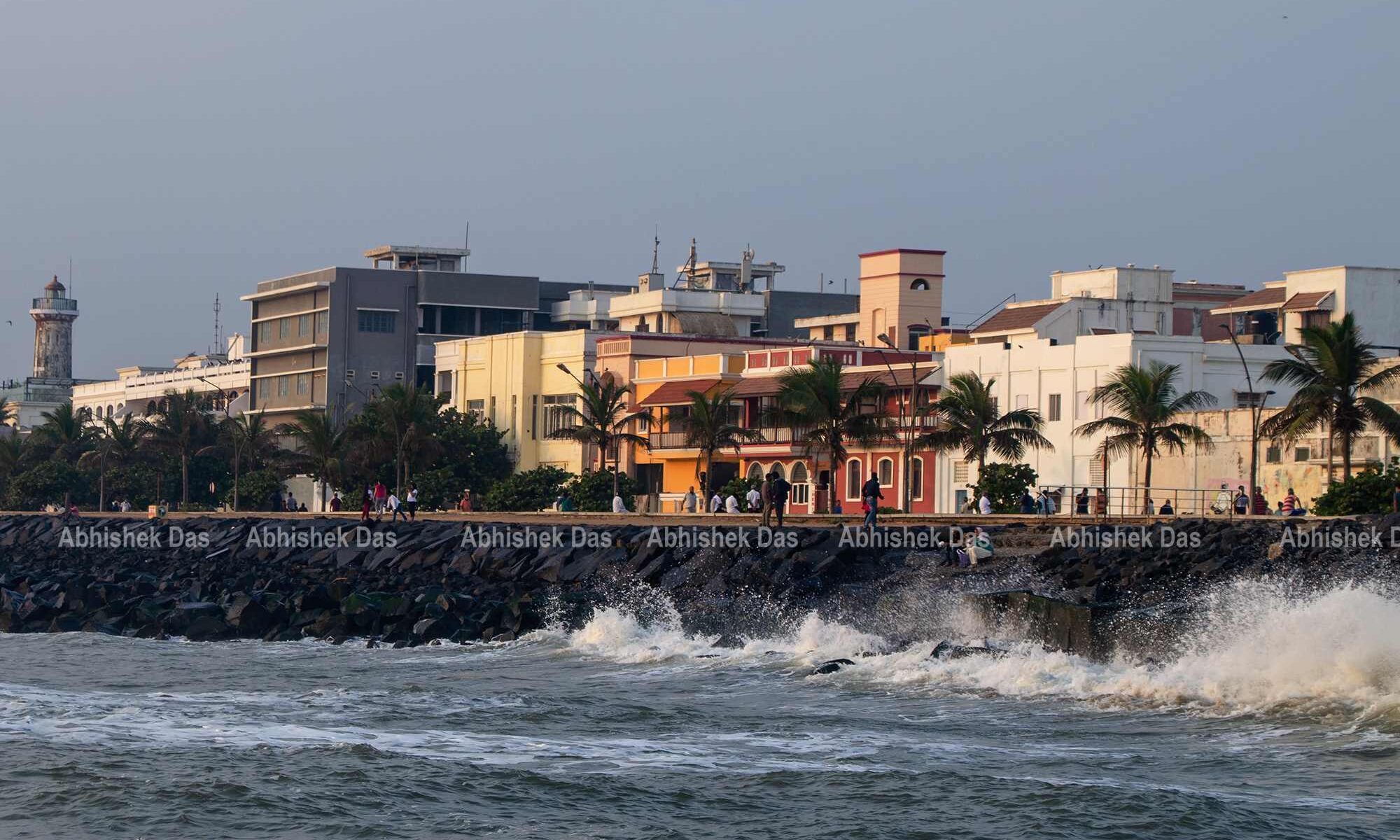 The charming seaside town, Pondichery, is one of the Union Territories of India. Three main reasons made me unanimously select Pondicherry (Pudducherry) as my first stop. First, the serenity and harmony of the town with the blend of French Colonies-impressions, I was looking for a long time. It is a small town that you can reach the entire city within two days. But I extended it for my second purpose that was to celebrate Christmas at this town. One of my utmost desire for Pondicherry trip was to explore the old forts and hidden beaches.

The new journey hoisted me after a long tiring RAC train from Kolkata to Chennai. I left the hostel early morning for CMBT Bus Terminus. A remarkable bus terminus as grand as the airport with all facilities such as marked signboards, clean platforms and long waiting lounge held me spellbound. It was easy to find a bus for Pondicherry, and I was on the way by 7 am. First time in my life, I discerned a bus with a bio-washroom facility. The roads are well maintained, it took only 3 hours to reach the destination. The journey was enduring with fresh sea-breeze, the lush green scenic view and stone monuments, will not disappoint you.

A Short Tale of Pondicherry

A Greco-Roman periplus depicts navigation and trading opportunities with other coasts and mentions of one marketplace named Poduke or Poduca. The ruin of Roman architecture which is a few kilometres from the city attests that it was an important trade point for spices since the 1st century A.D. The different southern dynasties had ruled the land, the sturdy rule of the great Empire Vijayanagara was the last Southern dynasty till 1638. In 1674 the second French Colony was established at Pondicherry after Surat. Eventually, this outpost became the chief French settlement in India. A treaty of cession united the bureaucracy of two countries to organize Pondicherry as a Union Territory of India in 1963.

You may also like: Exploring Cape Comorin- The Tamil Nadu

My Checklist of Things to Do in Pondicherry

I was missing mountains on this trip, feeling a moment of uncomfortable to stroll around the towns on plains. But the serene and calm places have always attracted me. These led me to the first halt of Exploring Cape Comorin- The Tamil Nadu was Pondicherry. I planned to explore the tourist spots around the outskirts of the town. The route to peaceful beaches and crumbling forts makes the planning an awesome-sauce trip. One of the other reasons to be in Pondicherry was to look for the places in my favourite movie Life of Pi. This movie has long back pulled me of its charms. Indeed it is a place to spend your vacation as the town appears further elegant at the nights of Christmas.

I checked in a hostel at a walkable distance from The White Town and the cheapest way to stay here for a long period. For the first day, I planned to rent a bike and cover a longer distance. A newly made friend, my roommate, was also interested to accompany me. It is always good to have a new companion, a fresh beginning of a journey.

It took us around one hour with small halts along the way to reach the fort. A fisherman took us in his small raft to the other part of the beach. An ancient dockyard weaved with a historical fort and clean white beaches with seagulls hovering around made a gratifying experience for me about the place.

It was constructed on the Coromandel coast in the 18th century during the Mughal era. It had served as dockyard since ancient times till the Mughal Era. The docks of Coromandel coast used to export spices, Zari clothes, salt and ghee. Later it was given to French, sooner in 1768 British captured it and turned into the ruins. It has witnessed war, earthquakes, tsunami and eternal sea-waves.

Now, it is decaying, and slowly its bricks are dissolving in the mighty sea. On the beachfront fishermen park their boats and assist tourists in a boating experience around it. This abandoned Fort stands as a testimony to the emigrating nature of quarrelsome empires.

You may also like: 10 Best Budget Holiday Destinations In India

The Fort is almost 50kms from Pondicherry and well accessed by roads. You may hire a bike or a taxi to reach the destination. We followed GPS to reach the place which is well-marked on the map.

I rented a sports bicycle for the next two days as transport for the local tour. It is the cheapest way to travel in and around the town. The plan was to start early in the morning to explore the charming town and its hidden beaches. Next day, I woke up early before my scheduled alarm, as the certain charm of sunrise has always shoved me.

I left an hour earlier from the hostel and was well ahead of schedule to stroll on other beaches. The darkness around the seaside street was gleaming with the street lamps. The people had already gathered around for morning walk and jogging with the flock of pigeons looking for their fodder.

Slowly, I moved to Rock Beach with paying tributes to Mahatma Gandhi and Jawaharlal Nehru memorials. The beach is around the famous White Town filled with bright mustard and white house, pebbled street and cafes. I placed myself perfectly for the sunrise, soon the wait was over of watching the sun rising from the horizon was a sensational moment.

The famous attraction of Pondicherry is White Town has the gorgeous colonial villas having vibrant yellow walls with oil lamps and leafy streets. I enjoyed just walking around the cobbled lanes alongside the dynamic blue street signs beginning with Rue. Trying to remember the names of French streets was difficult. I ditched my GPS and started having fun to move along the lanes.

A few French Quarters have been turned into heritage hotels, cafes and art galleries. A long walk made me hungry, so I stopped for my breakfast at the quirky cafe to savour a fresh Capuchino and Garlic Bread. It is a pretty special place that intertwined the thread of India with the past of French legacy.

The architectural character of the town with traditionally styled houses form the unique and distinctive streetscape. I stopped at one of the heritage building, a beautiful Tamil House restored as INTACH office in Pondicherry. The house has well documented with information about the restoration of the old world charm of the beautiful Tamil quarters and French colonies.

The chaste-shoreline of the beach plays hide and seek with the shimmering waves of the Bay of Bengal. I sprang on my cycle and set GPS for Serenity Beach with an endeavour to see for less crowded places. Along the way, I caught a glimpse of the town- antique shops decorated with vintage lines, beautiful rangolis around the grand temples and incredible Gothic styled churches beside beautiful lawns.

Soon I left behind the busy streets of the main town and entered the village dotted with coconut trees. The golden sand lapped with peaceful surrounding is the best compliment for the name ‘Serenity’.  The panoramic view of the beach- fishing boats lined up, fishermen sewing and preparing their nets for the catch of the day left me to spell bounded.

The waves on the shore are also appreciated for its water sports activity like surfing. If you are looking for the surfing course, you may contact the trainer for special classes they arrange for tourists. The sturdier rock lanes constructed to some distance within the sea is the most relaxing place to spend an afternoon.

You may also like: 10 Gorgeous Beaches Of India You Haven’t Heard Before!

Auroville and The Matrimandir

A universal town where people from all countries can live a life in peace and harmony, above all creeds, all politics and all nationalities. It was founded by a spiritual guru Mirra Alfassa in 1968 and designed by architect Roger Anger. The purpose of the ashram is to realize the unity of the human.

I hired a bike for a day tour at experimental town Auroville Ashram and the mighty golden globe of Matrimandir. The town is located in Viluppuram district, mainly in the state of Tamil Nadu with some parts in Puducherry. It is around 15kms from the White Town that took me 30mins to reach the place. The road to Auroville is much quieter and perfect to ride on.

The first stop of a day trip was The Tourist Information Centre with a small museum and an exhibition. It gives lots of information on Auroville and, in particular, the Matrimandir which is in the middle of the community. It is around a mile from the visitor centre with nice and shaded walk marked by lots of signs and plaques relating to the township.

The ancient Roman archaeological site gives an unforgettable experience by taking you back to 2nd Century BC. According to archaeologists, the excavated site inhabited by Tamil fishing villagers was formerly the major port dedicated for trading with Romans by Chola dynasty.

I decided to take a ride of 8kms by cycle for the site that goes through a lane of typical South Indian village filled with charm. Along the way, I was grasped by the sight of the bright colour houses with beautifully depicted rangolis on the doorsteps, children playing hopscotch on the streets and granny combing the hair of younger members.

Almost at the end of the village, a dirt road leads to the unique excavation site. It is most difficult to cycling on the sand though it was a short distance it took more time for me. I parked it outside the gate, and first, to the ruins, I heeded two entrance pillars which are almost disintegrating against the ravages of nature.

Then I moved towards the five arched doorway house, something most interesting in the wall was the huge sizes of bricks used to build. The site is under the protection of ASI, I hope a few more developments will attract the possibilities of tourists.

I was back in the lanes of the village having over 1000 years of recorded history. It has the pretty lengthy sea beach surrounded by extensive Palm Groves adding sublimity to the scenic beauty. It took almost 20 minutes to ride from Arikamedu for the beautiful and clean beach. The fresh breeze of Bay of Bengal lofted me to relax on the sand and enjoy the view.

It was busy with the activities of the fishermen fixing their boats, elderly and young people working together preparing fishing nets. I moved along the shore and noticed a few fishing boats were returning from their rough journey with treasures along.

The waves hitting the shore was so calm and time flew so quickly that I found the sun was at horizon. I moved back for my bi-cycle to make the journey back to the hostel. The peaceful day on the beach along with enjoying the lifestyle of fishermen is the speculum to our incredible India.

You may also like: 15 Exceptional Yet Underrated Destinations of India

How to travel nearby Pondicherry?

Pondicherry town is well accessed by local transports and its connectivity to other destinations. I planned to rent a bike and bi-cycle for my standard budget tour. If you are looking to travel in leisure then you may rent a car or hire an easily available taxi. Tuk-tuks and a few small vans are also available in the town.