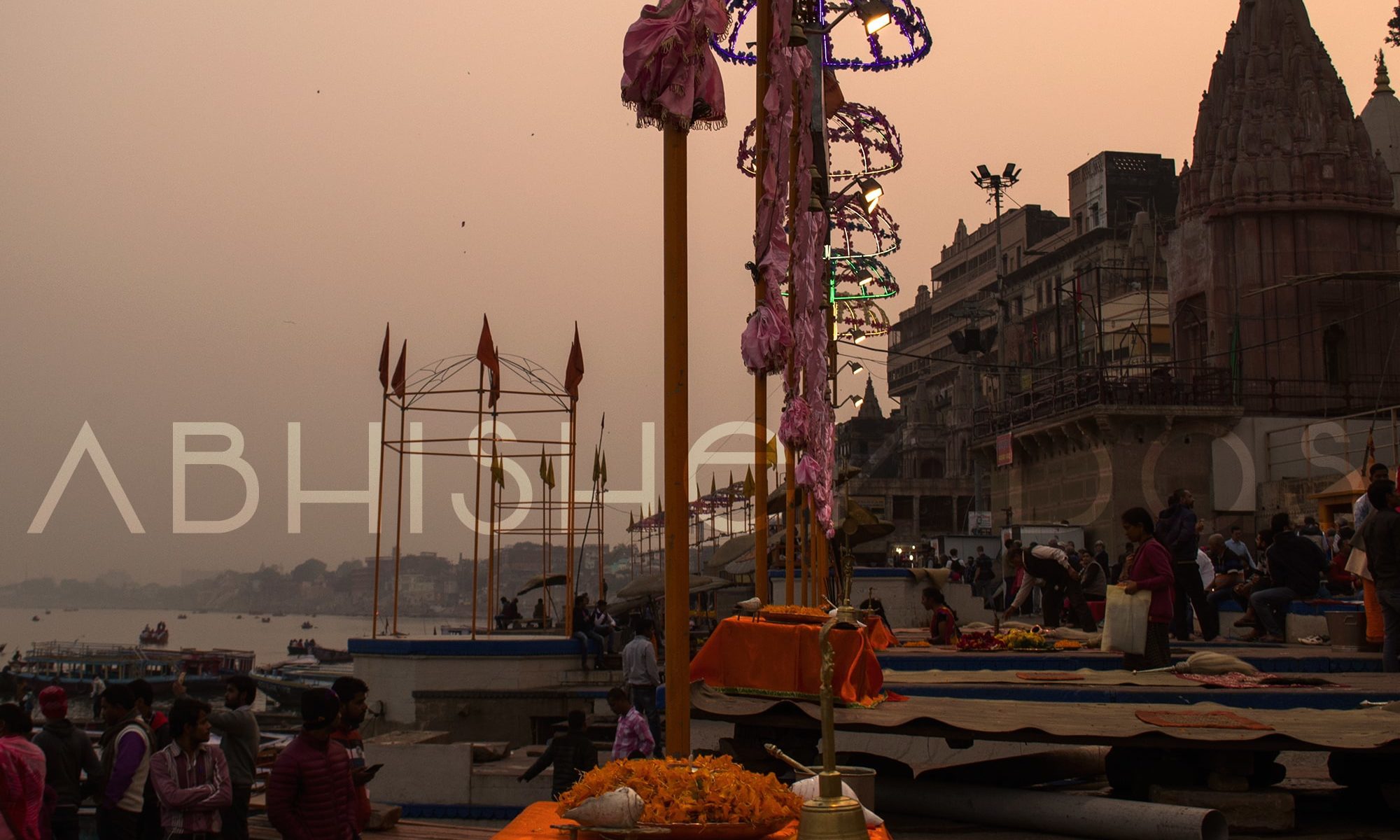 The ‘spiritual’ capital of India-Varanasi is beyond what one can imagine. The 88 ghats of Varanasi showcase periods of life-cycle as a melting pot where both life and death come together, which are interconnected in a rhythm. You can be wafted around the inter-connected ghats with the flow of Ganga and its essences of holy aroma. It concatenates to the strong metaphysical soul of yourself.

The holy saints’ bathe in Ganga for purification, meditating at the bank, serving other pilgrims for salvation along with the ghats marks a great outpouring of artistic revelation. Different eras merging at the ghats are well portrayed on the street walls. Narrow maze-like lanes and by-lanes give an instant plot with mystification. Every lane will make discover something new about the place.

The Ganga ghats in Varanasi are interconnected with each other. To begin your trails for the ghats you can have share tuk-tuks to Godowlia. The easy availability of tuk-tuks is cheap to travel. No vehicles are allowed beyond a certain point at Godowlia.

I started wandering around the ghats from Dashwamedh Ghat with a large crowd puller. The succession of shops along the streets has touts trying to drag you to their shop. It is believed that if you take a dip in Kashi’s Ganges with a patient prayer, it can purify the tainted soul. The vibrancy of Varanasi with the hymn of pilgrimage and aroma of delicacies makes every visitor a devotee.

People of any religion or from any corner of the world can find solace in the place. The boat ride around the river along the ghats gives you a perfect picture of the Holy Varanasi. According to the story from Purana, the ghat was constructed by Lord Brahma to welcome Lord Shiva in the Earthly adobe.

Dashashwamedh Ghat is the most important and colourful ghat of Varanasi. The baroque street towards the ghat is embellished with colourful shops around and the people from all over the world rendezvous towards the ghat. The holy temples with pandits waiting under the round umbrellas highlights its archaism and devotedness of the people serving there for ages.

The city comes to a standstill during the famous Ganga aarti in Varanasi which takes place in the evening at Dashashwamedh Ghat, a ceremony of immense grandeur and prosperity. The pandits line up to perform rituals which is no lesser than a performance of devotion with the light-up of flaring lamps along the river bank. You can take boats that are lined along the ghats to get the front view of Ganga Aarti.

I sauntered to the next ghat which was Manmandir Ghat. Adjacent to the ghat is an overlooking Jantar Mantar built by Maharaja Man Singh. The ornamental palace grabbed my attention in seconds. I later discovered a fine observatory on the palace. It gives a glimpse of the tradition in astronomy of the stars and planets towards which our country has significantly contributed. I found out that the 400-year-old palace is a big laudation for multifarious architecture lovers.

And so it is the artefact pillars, windows, and doors of the palace which will leave you in admiration of the work of the creator. Raja Man Singh of Amer built a bewitching palace along the ghat during the 16th century, which is known for its ostentatious windows. Thus this ghat was re-named after him as Manmandir Ghat from Someswara Ghat. You will get the panoramic view of ghats and the mighty Ganges from its balcony.

The observatory which is popularly known as Jantar Mantar can be witnessed from the roof of the palace. A huge stone made instrument which attracted me in the observatory is said to be used for studying heavenly bodies. This palace is overlooked due to its silence but it is fruitful to explore how the architecture amalgamates with history. The palace is now preserved under the Archeological Survey of India. Few devotees also come to pay respect to shiva lingam a popular avatar of Shiva’s Somweshar.

I moved from the historic architecture of Raja Mann Singh’s fort which signifies the role of India in astronomy with the beautiful carved balconies and windows. The panoramic view of Ganga swiftly instructed me to proceed for my next ghat. Walking along ghats of Varanasi is delightful with plenty of unfoldings which attracts people from different regions. As I mentioned earlier, the city is defined as a melting pot, so my next destination was the ghat where life stops. After a while, I picked a boat to appreciate the view of the ghats from Ganga. You can clearly find the turn of scenario while moving towards Manikarnika Ghat.

The journey of a man’s life is like a rollercoaster, and when the journey ends we forage for a place for salvation which can be found in Varanasi’s Manikarnika Ghat. It is the most auspicious place where it showcases you the reality of the life cycle. This is the holiest place for Hindu cremation with huge piles of firewood stacked along the top of the ghat with the smoke of salvation coming down from the ghat. As it is the oldest ghat of Varanasi, it carries along with it many mythical stories. Photography is strictly prohibited; it is the place for salvation and this should be respected in every manner. After praying for the peace for the soul I moved back to Dashwamedh Ghat for the Ganga Aarti.

The visually entrancing and architecturally impressive ghat features a photogenic favourite! Assi Ghat is the heart of Varanasi and a famous spot among the tourists to enjoy the amazing view of the sunset. It is at the confluence of the rivers Assi and Ganga which is 30min of walks along the south of Dashawamedh Ghat. The Ghat has immense religious importance in the Puranas and various legends. The large Shiva lingam under the peepal tree esteems a pilgrimage place for Hindus. To experience the true spirit of Varanasi, travel from Assi to Dashaswamedh Ghat in the evening by boat. The less crowded ghat compared to other ghats of Varanasi,it is the best place to stay in the city for a prolonged interval. The Ganga Aarti is also conducted here every evening with a splendid outlook.

According to Hindu mythology, Scindia Ghat is considered to be the birthplace of Agni “The God of Fire”. The ghat is estimated to be 150 years old and well known for its peaceful and clean environment. The attraction of the place is partially the submerged Shiva temple which is believed due to its weight it is sinking in the shore since its inception. The narrow maze of alleyways above is more lively in its atmosphere than any of other ghats of Varanasi. If you have spare time in your hand, you can book for temple circuit tour along the alleyways. The tourists gather for the early morning meditation at the serenity of the ghat to have an unforgettable experience.

Plan your next trip by using our trip planner to get a personalized day by day itinerary for your vacation. Solitary Traveller is a new way to plan your holiday.